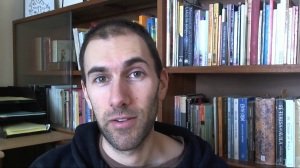 Why do I, like so many other Aspies, find small talk so painfully difficult? For some, the greater problem is a lack of conversational skills. This was definitely the case for me when I was younger. Yet despite the fact that I actually now have great conversation skills, there is still something about small talk that remains a struggle. It’s not that I can’t do it, or I’m not good at it. It’s more that I just really, really, really don’t want to do it.

So why is it that I have such an aversion? Have you ever had the experience with young children where they just want to play the SAME game over and over again? Maybe they have a favourite song or a favourite book. It seems no matter how many times you indulge their request, they always want more. “Again! Again! Again!” they cry, barely waiting for the end before asking to start again. This may be cute at first, but eventually, it gets old and you find yourself begging, “Enough! Can we PLEASE do something else!” This is what small talk feels like for me. I’ve had this exact same conversation hundreds of times already. Do we really have to do it again? Really?! *sigh* Fine! OK. ONE more time…

In an effort to avoid answering a predictable string of stereotypical questions, there is a great temptation to either say nothing at all, or to hijack the conversation by speaking at length about something I find interesting. I say ‘tempting’, because in the short term it’s win-win. If they’re interested, great! If not, chances are they will listen politely for a time and then eventually end the conversation and leave me alone. Are you noticing any stereotypical Aspie behaviour here? This kind of thing may be a good ‘way out’, but it’s extremely anti-social and if I want to be anti-social I might as well just stay home.

So how can I overcome this aversion? One thing that helped me immensely was gaining a conscious understanding of the purpose of small talk. Without this understanding it was so easy to think it was ‘pointless’ and ‘stupid’ and that people only did it out of habit because of mindless social convention. The difficulty is that most people just do it without really knowing why, so when I asked why it’s necessary I got completely inadequate answers like “it just is”, or “because that’s what’s expected”. This meant that I was left to figure it out all by myself – which took very many years. I’m still gaining more insights to this day.

Small talk actually serves very many useful purposes, but its overarching value is that it allows for safe, non-threatening interactions with strangers. To fulfil these requirements, small talk is necessarily predictable and superficial. The relatively strict rules of social conduct make it very clear what is expected, thus avoiding conflict and ensuring that no-one is left feeling awkward or unsure as to what to do or say. This is particularly problematic for anyone unfamiliar with these subconscious unwritten rules. Sometimes it can feel like I’m the only actor on stage who hasn’t read the script. Let’s just say my fellow actors are unimpressed with my ‘improvisations’. This took me a long time to get my head around. The problem is not the quality of my improvisations. It’s that when I deviate from the script it forces others to do the same. By not following the rules, I am seen as creating conflict, the very thing the small talk script is designed to avoid.

The reason superficial interactions with strangers are important is because society is built on emotional connections. Even if small talk doesn’t lead to anything deeper (because let’s face it, most of the time it doesn’t), it still facilitates the creation of weak social ties. In this way, even talking about the weather is connecting a shared experience.

Imagine a man tries to start a conversation with me. “Hasn’t it been cold recently!” he says. Chances are my first thought would be something like “It’s the middle of winter, what did you expect?!” But this fails to grasp the emotional message behind the words. What he is really saying is “Have you shared my experience of cold weather recently?” An appropriate answer would then be, “Yes, I experienced that too!” In this way small talk is about finding uncontroversial common ground that allows us to connect emotionally.

It is a common problem for me to focus on the literal meaning of the words and forget the purpose of what they are trying to communicate. Words are a mere conduit. The important thing to understand is the message being communicated. Most of the time, in a social context, this message is emotional, rather than informational.

Come to think of it, a lot of my behaviour could be explained by the fact that I don’t really value ‘weak’ ties. I’ve always preferred stronger connections. I wonder if that’s true of others on the spectrum?