Being too direct is a very common Aspie trait. Today I want to discuss a few things including why this causes problems and how it sets up a self-reinforcing pattern.

As you do (as I do anyway!) when attempting to explain human behaviour, I’ve drawn a flow chart. This is what happens when I take a direct approach to resolving conflict. 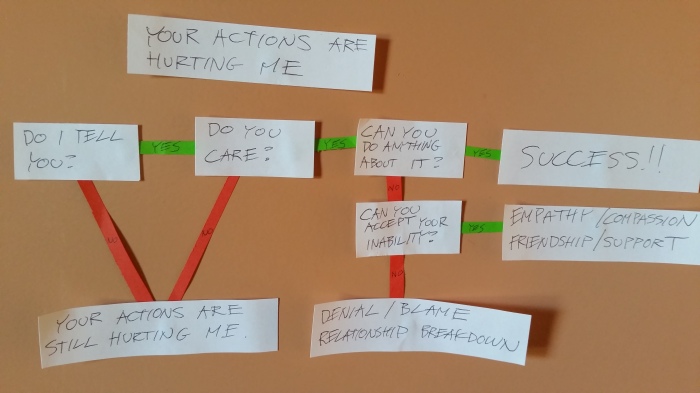 Briefly explaining the visual… First, there is some kind of conflict, i.e. the actions of another person are hurting me in some way. I have two choices. Do I tell them? Or not? It’s pretty clear that if I don’t tell them, the behaviour will continue. If I do tell them, the next question is do they care? But caring is not enough. Can they actually do anything to change their own behaviour? If not, this is where things get interesting, and a direct approach often leads to less than desirable consequences.

Let me explain how it works using an example that happened to me recently.

I had a housemate a little while back that would occasionally use my milk in the fridge. This doesn’t sound like a big deal, and it would have been fine, except that I would frequently wake up in the morning and have nothing for breakfast. I have a pretty organised routine in the morning. It’s very efficient and I don’t waste time. You can imagine that opening the fridge to discover that I don’t have any breakfast is more than just a little inconvenience. I’ve just woken up, still half asleep and not even dressed yet, and now I have to go out to the shops? What a way to start the day! It throws out my whole morning!

At first this was only a minor thing. I wasn’t too angry. I asked her not to use it and I explained why such a seemingly little thing had a large effect on me, including why simply replacing the milk at a later stage was no good, since the damage had already been done. So, where are we on the flowchart? I’ve told her, she does care, and she’s promised not to do it again. Great! Except… the next question is “Can you do anything about it?” Unfortunately, as it turned out, the answer here was no. She was physically and psychologically incapable of fulfilling her promise and the problem continued for some time.

Here is where I went wrong. Due partially to ignorance, I took a direct approach. I spoke to her again. Things clearly weren’t working. We needed another solution. How about you can borrow as much milk as you like, so long as you tell me about it? That way you can still use it, and I don’t get a surprise when I open the fridge. Sounds reasonable? Great! Except… again, she was physically and psychologically incapable of meeting this commitment either….

Now we had two problems. Stolen milk and broken promises….

The next question on the flow chart is “Can you accept your inability?” It was becoming increasingly apparent that the answer was no. We were friends, we had a good relationship, we cared about each other…. but all those factors only made the situation worse.

My direct approach was exacerbating the problem in two respects. Firstly asking such a direct question compelled her to give a false answer. “Can you do this simple thing for me?”… “Yes! Of course I can!” Secondly, I was compounding the problem by giving her the benefit of the doubt. When she said she would do something, I believed her. I kept giving her another chance, which only led to greater and greater failures. The first clue that a person cannot accept their inability is that at this point, words and actions diverge significantly (i.e. promises are made and not kept).

Foolishly, I didn’t learn my lesson. I kept trying to solve the problem in a direct way. I would talk to her about it, offer solutions, try to meet her half way and find the reason previous solutions weren’t working. If you take milk and then forget to tell me, how about you tell me first? If telling me first sounds too much like asking for permission, and you don’t want to have to ask for permission, then maybe send me a ‘thankyou’ message instead? I’ll do it too whenever I use even the smallest amount of anything of yours. “I borrowed one of your eggs today! Thanks for that, it saved me a trip to the shops :)” I was bending over backwards and getting nowhere.

In hindsight, the underlying problem was that she could not be honest in those conversations because she didn’t want to admit to herself that she was incapable of leaving my stuff alone. This inability was quickly masked by defiance, excuses, and blame. “I don’t want to have to leave your stuff alone. I shouldn’t have to! You’re being unreasonable!  It’s not stealing, it’s just borrowing! Why do you care so much anyway? It doesn’t really affect you. You’re being too sensitive. Stop asking me for such little things. Why do you keep getting upset? Will you just leave me alone!” This type of disproportionately large violent outburst is often a sign of triggering an unconscious defence mechanism (e.g. denial).

I was showing her a side of herself that she didn’t want to see. Why would she want to be around me?

Now at the start of this piece I said that this sets up a self-reinforcing pattern. Once we get to this point I am being blamed. I am being told that I am the problem. I’m too sensitive. I’ve misread the situation. Hearing this message repeatedly amounts to something called Gaslighting (essentially questioning a person’s perspective and judgement until they begin to doubt themselves). The result is that I never feel confident to trust my interpretation of the situation. “The other person is upset. It’s probably my fault. I’ve probably misread the situation again.” This chronic self-doubt leads a person (and I’ve seen this in many aspies I work with) to simply accept whatever the other person says. We don’t want things to be ambiguous. When things are ambiguous we get it wrong – all the time! I just want someone to tell me directly what’s going on, to set me straight, correct my misunderstanding, and give me an accurate description of the situation.

Hopefully you can see how this self-doubt results in the desire and preference for being more and more direct. And then, unfortunately, it leads to the same place, of denial, blame, and relationship breakdown. “It’s my fault again. I’ve misread the situation again. I really wish people would just be more direct with me to save me from myself.” I even had an aspie friend the other day tell me that she couldn’t understand why people wouldn’t tell the truth (i.e. be anything less than 100% direct).

Recently, I’ve learned that the only way out of this pattern is to trust my own judgement. When I see (through evidence) that a person is incapable of fulfilling their promises, I need to treat them as incapable, regardless of what they say (i.e. regardless of how capable they WISH they were). This is very difficult for me because I like to give people second chances. Ironically, withholding a second chance, is the more forgiving option. I realise I probably haven’t explained how I made that last jump to forgiveness…. haha… but I’ve written enough about this for one day.

If you took the time to read this I’d really appreciate some feedback as to if it made sense to you!

26 thoughts on “Being Too Direct”